Western Colorado has a long and rich tradition of family farming and ranching. In recent years, however, it has become more and more challenging for farmers and ranchers to make a viable living and stay on their land. At the same time, there is growing consumer demand in Western Colorado for locally produced food.

WCC has been a leading voice for rural western Coloradans since 1980. Our members are working to bring together small farmers, ranchers and community members to find new ways to connect with consumers, stay on their land, and build vibrant local economies.

In May 2015, WCC celebrated a major victory when the Colorado legislature passed a law to expand Colorado’s Cottage Foods Act. WCC members were involved every step of the way, from drafting the bill, to securing bipartisan sponsorship, to calling and meeting with legislators to urge their support. House Bill 1102, which passed in the final days of this year’s legislative session, adds pickled vegetables to the list of foods that producers can make in their home kitchens, along with flour, fruit empanadas and tortillas.

Promoting policies that make it easier for small farmers to sell their value-added produce directly to consumers has been a priority for WCC since 2010. WCC worked to pass the first Colorado Cottage Foods Act in 2012. The following year, WCC passed a second Cottage Foods bill that clarified training and licensing requirements. These new laws have made a difference to the bottom line of an estimated 2,000 small farmers and food entrepreneurs around the state. In 2014, after the state health department put up resistance to expanding the law to include pickled vegetables, WCC launched the grassroots campaign that led to this spring’s expansion bill.

Meanwhile, WCC is investigating ways to level the playing field for small and mid-sized livestock and poultry producers. These producers face many barriers to accessing local and regional markets. We are currently conducting an assessment of organizing and policy handles to address this situation.

Finally, WCC members serve as the western Colorado “boots on the ground” in regional and national campaigns to support family farms and ranches, sustainable agriculture, and local foods. As the Colorado state affiliate of the Western Organization of Resource Councils, we mobilize our members on issues such as the Food Safety Modernization Act (FSMA), Country of Origin Labeling (COOL), and the Trans-Pacific Partnership (TPP).

Contact WCC Organizer Rachel Zatterstrom at (970) 256-7650 or [email protected] for more information or to get involved. 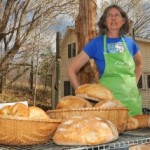 The Paonia farmer and baker was the driving force behind the original 2012 Colorado cottage foods law, which has been a boon to hundreds of small-batch producers around the state. The measure proved so popular, in fact, that Wiitanen and other advocates mounted a second campaign this spring to expand the act and pay it forward for an even wider circle of small farmers and home canners. More...
↑