Public lands issues have been at the forefront of WCC’s campaigns since the early 1980s. Our winning campaigns have shaped environmental assessments and management plans, halted ill-conceived commercial logging, and protected old growth forests and wetlands.

Our campaigns focus on:

The wilderness area is about 20 miles south of Grand Junction, on the northeastern edge of the Uncompahgre Plateau.

WCC members are now involved in gaining comprehensive protection for the Dominguez-Escalante NCA in the Bureau of Land Management’s (BLM) 20-year management plan, as well as on-the-ground maintenance of the area through WCC’s Trail Hands program.

In 2013, the BLM released the Draft Resource Management Plan (RMP) for the Dominguez-Escalante NCA for public comment. WCC and allies submitted substantial comments to the BLM and are now awaiting the Final Draft expected for release sometime in 2015.

Please read about our general impressions of the RMP here. 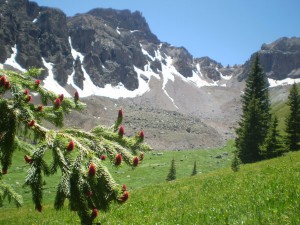 To build support for the wilderness expansion, our members met regularly with the Ouray County Commissioners and with our former Congressman John Salazar.  Salazar was a champion for the San Juan wilderness bill, serving as a tireless negotiator with mining, ranching and motorized recreation interests.  WCC members participated in every stakeholder meeting and played a key role in negotiating the wilderness boundaries.  Congressman Salazar introduced the San Juan Mountains Wilderness Act in October 2009.

In February 2013, Colorado Senators Mark Udall and Michael Bennet reintroduced the San Juan Mountains Wilderness Act.  Congressman Scott Tipton has held listening sessions to hear public comment on the wilderness bill and our members have made our message clear, “Yes on Wilderness Expansion.” Contact Representative Tipton today and urge him to become a House sponsor for this bill!

For a map of the San Juan Wilderness Act click here! And for our fact sheet, click here! 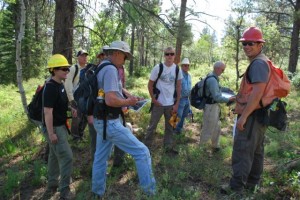 Since November 2007, representatives from WCC and other conservation groups have been meeting with timber industry and land management agency staff to develop a consensus on principles and specifics for a relatively large-scale forest restoration project on the Uncompahgre Plateau.

Among the different forest types on the Plateau, it is the pure ponderosa pine forests that have the clearest need for active management to restore it to a more resilient, bio-diverse natural condition. Extensive logging at the end of the 1800s and climatic conditions in the early 20th century led to even-aged stands of ponderosa that are extremely susceptible to high-intensity crown fires.

This Uncompahgre Plateau Collaborative Forest Landscape Restoration Project [the 9th bullet under “Vegetation/ Fuels Management Activities] entails a number of proposed treatments to restore the ecosystem to its former glory.

WCC is part of the Dolores River Coalition. The lower Dolores River basin near Gateway is a land of spectacular red-rock canyons and stark contrasts. This area is home to six citizen-proposed wilderness areas that provide critical wildlife habitat, diverse flora and fauna, unique cultural resources, rugged backcountry recreation opportunities and stunning red rock vistas that draw visitors from far beyond this region.

The wildlands of the lower Dolores Basin are under threat from both increasing recreational use and energy development. The nearby urban centers of Grand Junction and Montrose are growing rapidly, bringing increases in the number of recreational visitors, including those using off-road vehicles. Energy development pressures have also been increasing. In recent years, the BLM has approved drilling in a large portion of the lower Dolores basin. Interest in tapping the uranium resources in the Dolores Basin has also swelled over the past two years, and the permitting process for a new uranium mill in the Paradox Valley is underway. If this mill opens, it will bring with it a surge in mining activity that will compound the mill’s threats to the region’s air and water quality.