It is likely there will be a minimum wage initiative on the Colorado ballot in 2016 that could resemble a recent bill in the legislature to raise the wage to $12.50 by 2020 in $1 increments starting in 2017.

Colorado law doesn’t allow municipalities to set their own wages, so the minimum wage must be statewide. And since the state legislature killed two bills pertaining to the minimum wage issue in the spring, any change will likely have to come from a citizens’ ballot initiative.

At WCC’s Annual Business Meeting on Sunday, Sept. 20, members will be asked to consider the following resolution in support of a minimum wage in Colorado:

WHEREAS, the dignity of work is enhanced by a living wage system that values the contributions of all workers;

WHEREAS, higher wages for workers is a stimulus shown to improve the economy;

WHEREAS, our economy increasingly offers people few options other than low-wage service jobs; and

WHEREAS, the costs of housing, food and other essentials increase much faster than the annual CPI adjustment of Colorado’s minimum wage; and

WHEREAS, low-wage workers cannot afford healthy, locally-produced food and are forced to shop at the very businesses that exploit their labor and our ecosystem; and

WHEREAS, a stable economic foundation is critical for people to lead more sustainable lifestyles and protect our environment.

NOW THEREFORE BE IT RESOLVED that the Western Colorado Congress supports a living wage for all workers in Colorado.

This resolution came out of a recommendation by WCC’s Legislative Committee in response to concerns about wages raised in meetings with our organizers.

Resolutions by the members allow our issue committees the flexibility to engage in campaign work on a given issue. That’s the “democracy” of our organization – members decide what our position is on a given issue, and members (serving on the relevant issue committee) then choose campaigns and set strategies.

Supporting a living wage fits under the social and economic justice aspect of our mission and is an opportunity to build a much bigger, younger and diverse audience as we work on an issue that resonates deeply with many families on the Western Slope.

Clearly, this is economically unsustainable for families. It is a sign that the minimum wage has failed to keep up with the cost of living, and a reflection of the growing economic inequality in our society.

Those who oppose an increase in the minimum wage cite national statistics that only 3 percent of workers earn the minimum wage, so raising the minimum won’t help that many people. But of course, the people who would be helped are the ones who are most in need. Moreover, just over 25 percent of Colorado workers currently make less than $12 an hour, and would therefore be helped by this legislation.

It’s important to remember this issue is highly politicized and much of the research on wages is ideological, on both side of the debate. That’s why we think it’s important to seek out neutral sources that demonstrate the greater collective benefits of higher wages, both for individual workers and local economies.

A study from the Federal Reserve Bank of Chicago shows that even for allowing for some disemployment effect, a higher minimum wage will boost local economies because low-wage workers spend their additional income in their communities.

Finally, here’s the analysis of employment in states that raised the minimum wage in 2014: 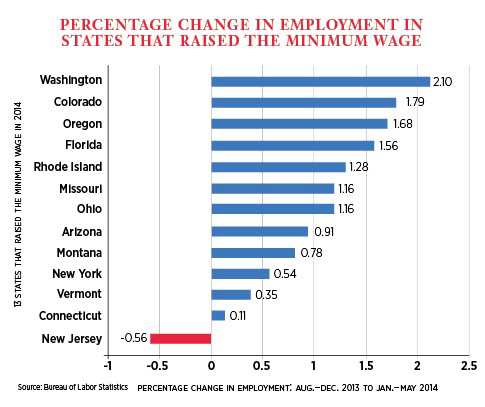