One week till Election Day! 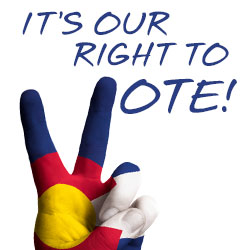 Next Tuesday, November 4, 2014 is the BIG DAY! Our democracy will be in action and, hopefully, your voice will be heard.

Itâ€™s hard when nearly $100 Million has been spent in Colorado already, but thereâ€™s hope. Colorado voters can see the difference between corporate money and genuine free speech-even if weâ€™ve been subjected to scads of advertising, mailers, and maybe a door-knocker or two.

Folks know an important election when they see one. There are US Congressional and Senate races; state legislative battles, multiple proposed ballot measures, plenty of local items, and more. A lot is happening and you better not miss out. Click here to see Coloradoâ€™s official Elections Page and Ballot Guide.

One of the proposed ballot measures is Proposition 105. If passed, people would have the right to know when food has genetically modified ingredients. WCCâ€™s working hard to support consumers who are hungry for transparency in their food, even if Monsanto and other giants donate millions in opposition.

Maybe youâ€™ve already voted early or by mail-in ballot. More Coloradans are doing it as a way to ease lines at the voting booth on Election Day (Nov4). Others prefer mail-in options because you arenâ€™t rushed and decisions can be made at the kitchen table. Just make sure it gets to Denver on time!

You can still vote in person, either early or on Tuesday, November 4. Voting Centers have been set-up across Colorado, and there may be one near you. Click here for more info about where to vote in Colorado.