When oil shale is mentioned on the Western Slope of Colorado, it is discussed as a boondoggle that brought our economy to its knees. The day that Exxon closed down its oil shale operations and sent home over 2,000 workers — May 2, 1982 — is still referred to as Black Sunday. Extracting oil out of rock proved to be too technologically challenging and too expensive to pursue.

Now, over 20 years later, Congress tells us that everything has changed. With surging oil prices, suddenly oil shale is being touted as a way for the U.S. to achieve energy independence. The Energy Policy Act of 2005 put the Bureau of Land management (BLM) on a path to commercially lease oil shale reserves as early as 2008 — despite the fact that no economically viable technology to extract these resources has yet been proven. Concerns are many-fold: 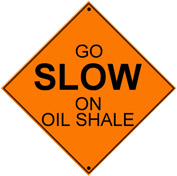 On February 15, 2011, US Department of the Interior (DOI), WCC and 12 other conservation groups settled two pending lawsuits, suspending litigation so DOI can review oil shale policies adopted by the previous administration.

The agreement provides that he BLM will publish final oil shale leasing regulations by November 18, 2012.