Recently, the Department of Energy (DOE) announced considerations to kick-start uranium mining on thousands of acres across Western Colorado. Their Programmatic Environmental Impact Statement (PEIS) recommends continued uranium exploration and mine development in Mesa, Montrose and San Miguel Counties. The 31 leases cover 25,000 acres of public land, including tracts that surround the Dolores and San Miguel Rivers. Under the DOE’s preferred alternative, 19 new uranium mines in addition to the existing leases could operate simultaneously during the peak of operations.

Renewed uranium mining could bring jobs to Western Colorado, however also could bring a host of public health and environmental impacts.  Our region has already carried the disproportionate burdens of an industry that has left behind a legacy of toxic waste and radioactive contamination that is still being remediated by taxpayer monies.  We believe that a different future is possible for Western Colorado by putting people back to work cleaning up old mine sites and developing our potential as a renewable energy producer.

The DOE is now accepting public comment on this document until July 1st. Given the many legitimate concerns around this issue, it is critical that local voices are heard in this process. CLICK HERE to sign our comment letter to the DOE!

For more thoughts about the impacts of uranium mining, please click here. 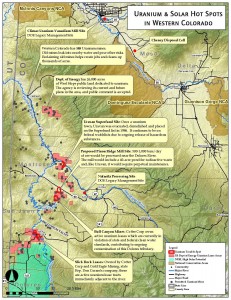 BACKGROUND: In 1948 The BLM “withdrew” uranium mining claims within the Uravan Mineral Belt in SW Colorado to “reserve the uranium resources for the US Government.” The leases were transferred to the control of the Uranium Leasing Program (ULP) of the Dpt of Energy and were developed for the use of nuclear bombs during World War 1 and the ensuing Cold War era. In 1962 the leases expired and the sites were officially closed. Reclamation was not done at the time. In 1994, the DOE initiated a reclamation projects on all the lease sites. At that time lease sites were prioritized by the DOE and the “Legacy” claims were reconsidered for future development. In 2007 the DOE issued a “Finding of No Significant Impact” (FONSI) for the extension of 13 leases and the expansion of the ULP to include 25 additional lease tracts for the uranium industry. Exploration and other surface disturbance activities were conducted on the several of the lease sites between 2007 and 2011.

In July 2008  conservation partners challenged the FONSI. In Oct 2011 the court rules that the DOE had violated NEPA and invalidated the program, stopping the DOE for issuing any additional leases or approving additional activity on the lease tracts already leased. The court order forced the DOE to go back and conduct a thorough Program Environmental Impact Statement (PEIS) to determine all impacts from the lease program.

Judge Richard Dana will be the independent hearing officer for the formal hearing on the Piñon Ridge Uranium mill application. The hearing will be held Nov. 7-12 in Nucla, Colorado. It is an opportunity for us to express our concerns about building a new uranium mill in the West End of Montrose County, which still suffers economically, environmentally and health-wise from the radioactive waste left after the last uranium bust 35 years ago.

Send Judge Dana an e-mail to show him that Coloradans are still concerned about the negative impacts the uranium industry left in our area and ask him to deny the mill application or impose strong safety and financial security requirements.  [read additional Talking Points]

On June 13, 2012, a Denver District Court invalidated a radioactive materials license that was issued for the proposed uranium mill.  The license had been issued to Energy Fuels, Inc., by the Colorado Department of Public Health and Environment (CDPHE) in January 2011.  The November public hearing in Nucla is a direct result of the District Court’s ruling.

Sheep Mountain Alliance and Western Mining Action Project, joined by the governments of the towns of Telluride and Ophir, filed the suit which prompted the District Court ruling.  The towns have since settled out of court.

In his ruling, Judge John Mc Mullen said, “The Department had ignored its agreement with the Federal government to comply with Federal and Colorado State requirements for not allowing the public meaningful participation in the licensing process.”   This ruling echoed the Nuclear Regulatory Commission complaint earlier this year that CDPHE had failed to follow the Atomic Energy Act guidelines.

The milling of uranium ore creates a refined material called “yellowcake” through a chemical process that results in complex wastes that are toxic as well as radioactive.

So, will the mill be built? Not necessarily. The Denver Post believes this ruling will only delay the uranium mill, but a number of other permits must be obtained and they must meet the conditions of Montrose County and other permits. Your opinion still matters as a means of enlightening these decision-makers to come. The New Yorker and New York Times have carried articles about the mill — add your voice to the debate with a letter-to-the-editor in your local paper!