Each year, WCC takes a delegation of members to the state legislature in Denver to lobby for legislation that benefits the Western Slope. By all measures, the 2015 WCC People’s Lobby Trip was a huge success! Here’s an update: 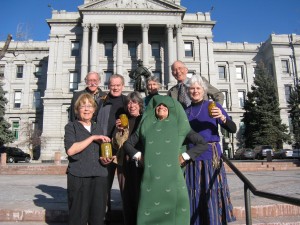 Our Cottage Food Expansion bill (HB15-1102) cleared its first hurdle on Tuesday, passing out of the House Public Health Care and Human Services Committee with a 10-3 vote. WCC and Rocky Mountain Farmers Union members testified in favor of the bill.

Following collaborative work with state and local health officials, we offered an amendment that creates a rulemaking process through the Colorado Board of Health to establish any additional oversight needed for producers who want to make pickled vegetables. The bill. co-sponsored by Reps. Hamner (D) and Willet (R), was sent to the House Appropriations Committee with a favorable recommendation, and has broad bipartisan support. 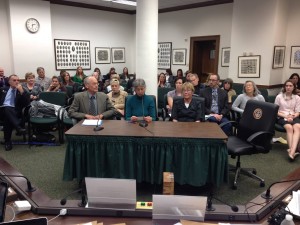 While in Denver, WCC members met with lawmakers and the Colorado Energy Office about bills related to energy efficiency and renewable energy standards.

We discussed the Residential Energy Efficiency Tax Credit (HB15-1132; Coram-D and Becker-R), currently waiting to be heard in House Appropriations, and a similar bill for multi-family buildings. We also heard about favorable amendments to Sen. Grantham’s SB15-046, which makes it easier for Rural Electric Associations to meet the state’s renewable energy standard. After lengthy negotiations, the bill passed third reading in the Senate and now heads to the House.

WCC members also met with senior policy advisors to Gov. Hickenlooper and urged the Governor to stand up for communities and people impacted by oil and gas development.

WCC talked to several lawmakers, including Senate Sponsor Kerry Donovan, to hear about HB15-1225, which would allow technical support for local governments to participate in federal land-management decisions. The bipartisan bill is moving quickly -it passed third reading in the House, and heads to the Senate’s Local Government Committee. WCC has not yet taken a position on the bill as we still have some concerns about possible implications.

We also spoke with lawmakers and allies about SB15-069, which would repeal civil rights protections for Colorado workers. The bill is currently waiting to be heard in Senate Appropriations and we will continue to monitor its progress.

We’re happy to report that HB15-1177, which creates an economic development grant program for highly distressed rural counties, sailed through the House Business Affairs Committee with a 12-1 vote and now waits to be heard in House Appropriations.

For information about all the bills WCC is tracking, including our positions and where they are in the process, see our bill tracker.

To join WCC’s weekly legislative calls with our legislative liaison, please contact Rachel at (970) 256-7650 or rachel(at)wccongress.org.