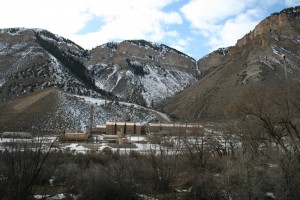 All summer long, crews have been cleaning up water sullied by oil and gas drilling near Parachute, Colorado.  The worst is over, but residents of the gaspatch have unanswered questions—and they don’t want this to happen again.

Since December of 2012, natural gas liquids (NGL’s) and diesel-range organics have been contaminating Parachute Creek and nearby groundwater.  This tributary of the Colorado River is a local irrigation water source and, as one area blogger asserts, “High benzene levels persist in the groundwater surrounding the creek.”

Spikes in benzene were detected this summer. Although levels have gone down, one monitoring well (site CS-6) saw readings as high as 9.2 parts per billion (ppb).  The July sample was the first time since May that concentrations of the cancer-causing agent were detected above drinking water standards of 5 ppb.

According to the Colorado Department of Public Health & Environment (CDPHE), elevated levels of benzene are due to “an interaction between ground water and creek surface water in that specific area.”

Williams, one of the involved companies, plans to remove millions of gallons of groundwater at a rate of 50 gallons per minute, clean it and return it to the aquifer.  Williams says it has already recovered about 7,600 gallons of the 11,000 gallons of pollutants.

About 155,000 gallons of groundwater tainted by the NGL leak were removed in March and injected into a disposal well in Grand County, Utah.  Additionally, Williams began operation of a new vertical “air sparge” that extracts benzene from water by aerating it.  The company hopes the new sparge stops the flow of contaminated groundwater that may be causing the high levels of benzene near CS-6.  CDPHE also says approximately 130 tons/day of contaminated soil is being shipped to a treatment site in East Carbon, Utah.

In July, the Occupational Safety and Health Administration (OSHA) fined three companies after determining clean-up crews were not properly protected. According to the Denver Post, federal officials levied $9,800 in fines against Rangely-based Striegel Inc.; $7,854 against Bargath (a Williams Co. subsidiary); and $10,200 fine against Rifle-based Badger Daylighting Corp.  Federal laws say employers must give workers who are responding to chemical spills suitable respirators when necessary.

Sometimes related companies can be legally separate entities—making it hard for regulators to connect the dots or hold companies accountable.  In January of 2012, that’s exactly what Williams did.  The company separated into two stand-alone, publicly-traded corporations. Williams became an infrastructure company, and many of its pipeline assets were held by the master limited partnership Williams Partners LP.  WPX Energy became the drilling, production and exploration group that today has over 4,100 wells in the Piceance Basin.  Bargath LLC is the subsidiary of Williams Partners that operates the Parachute Gas Plant (and was the subject of the OSHA fine).

Although they are legally separate companies, Williams has been the one talking to regulators and overseeing clean-up. Ironically, WPX Energy received three awards from the Colorado Oil & Gas Conservation Commission.

Although investigations and clean-up efforts were underway, the company received kudos for environmental achievement, efficiency, and community involvement.

Voice your concerns to CDPHE!