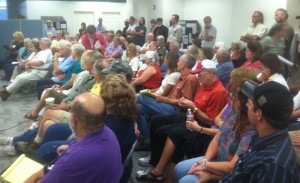 Nearly 75 people turned out for an August 8 public meeting in Whitewater on the Fram drilling proposal.  The unincorporated community packed a meeting hall to hear about the proposal, to consider potential impacts, and to learn about public comment opportunities.    The meeting was hosted by WCC, Citizens for Clean Air, Conservation Colorado and WCC of Mesa County.

About 15 miles southeast of Grand Junction, Fram Operating is looking to drill (and frack) up to 108 horizontal oil wells over the next four years.  From nearly East Orchard Mesa to Kannah Creek, the Whitewater-Fram Master Development Plan focuses on 26,000 acres of public land in Mesa County.  If approved, and oil prices stay high, drilling would occur for the next four years.

There’s been talk of drilling on the west side of Grand Mesa for a few years now.  Fram’s latest proposal for 108 oil wells takes the place of their previous proposals, the largest of which proposed to drill up to 492 natural gas wells in Mesa and Delta Counties.

Some drilling has been happening near the proposed project area already.  Fram has been drilling for natural gas, mostly on private land with oversight by the state.

However, this new proposal spans BLM land between Horse Mountain and Lands End Road.  The area includes creeks and canals, reservoirs and aqueducts, which supply drinking water for Grand Junction and irrigation water for Whitewater-area locals.  The area encompasses ranches and small farms, wineries, orchards, homes and businesses. There is even critical winter range for elk and mule deer, and inventoried habitat of the endangered Colorado Hookless Cactus (Sclerocactus glaucus).

In July and August, WCC led the charge to request more comment time from the BLM.  We succeeded in having the public comment period extended from the original deadline of July 31 to August 14. Although multiple organizations and citizens requested even more time from the BLM, over 25,000 comments poured in from across the country.

Drilling is a dirty, dangerous business that can risk agriculture, recreation, environment, public health, quality of life, and tourism. That’s why WCC and its friends are asking BLM for higher industry standards, better impact analysis, proactive mitigation strategies, investment in air and water monitors, and more. We’re also concerned about industry’s impact on agri-toursim near Palisade, roads near East Orchard Mesa, and the recreational experience in nearby Dominguez Escalante National Conservation Area.