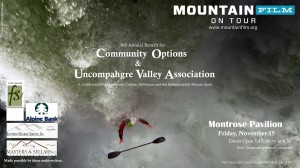 If eight years makes a community tradition, then the upcoming Mountainfilm on Tour in Montrose has become one.  This benefit and community awareness event for Community Options and Uncompahgre Valley Association (a WCC community group) consistently has filled the Montrose Pavilion to capacity with inspiring, jaw dropping, thought provoking, often humorous and always entertaining short films that focus on adventure, world cultures, extreme sports, general human interest and celebrate “the indomitable human spirit.”

Beth Gibson and Jim Womeldorf, organizers of the annual event, think this year’s show promises some of the best films yet.  Be prepared to be inspired by seeing gorgeous filming of breathtaking kayaking deep in the jungle of Mexico, by experiencing the insanity of jumping from mountainsides to “fly” in a wingsuit, and by witnessing the strength of a man’s character in his quest to support his family in poverty-stricken Thailand.

The feature film this year chronicles the adventures and personal growth of two young men who choose to surf a deserted beach in Norway above the Arctic Circle, living there with minimal impact for nine months!  These and six other moving films create an evening of pure entertainment for film lovers of all ages.

Showtime is November 15th at 6:30. Doors will open at 5:45.  Donations are gladly accepted the night of the show and a silent auction will feature 20+ items!  Come ready to bid and support our important work! 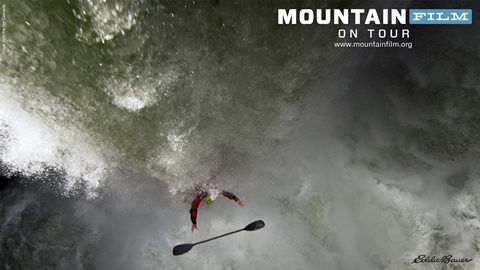