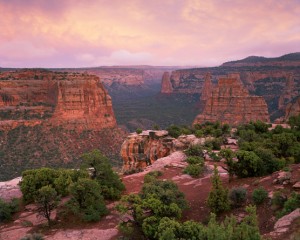 Over the past three years, the Western Slope community has wrestled over the proposal to redesignate the Colorado National Monument to an official National Park. Now, after a year of work by a legislation drafting committee, Senator Mark Udall (D-CO) and Congressman Scott Tipton (R-CO) have unveiled a bipartisan proposal for public review through June 29th.

If approved, this draft Senate legislation would create the “Rim Rock Canyons National Park,” an idea dating back to when John Otto first worked to protect these lands. However, there are still many outstanding questions and concerns about this proposal from both proponents and opponents of the redesignation.

Western Colorado Congress does not have an official position on this proposal at this time, and encourages interested members to attend a listening session with Sen. Udall and Rep. Tipton this Saturday, May 17 starting at 12:30 pm to learn more.  The session will be held at the Grand Junction City Hall Auditorium located at 250 N 5th St.

While supportive of the idea of a National Park, allies from the conservation community have identified a few concerns with the draft language. Specifically:

For more information about this National Park proposal, check out:

Please also share your thoughts and comments about the proposal with WCC’s Public Lands Committee. Our next meeting is May 28th at 6pm in the Delta Chamber of Commerce Building (map). Or contact Emily at 970-256-7650 or emily(at)wccongress.org