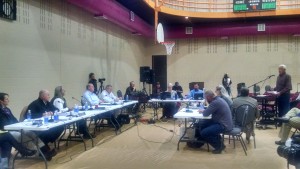 Battlement Mesa resident Don Grey presents to the Garfield County Commissioners a petition with 500 signatures asking them to deny Ursa’s permits to drill within the PUD. Over 150 people turned out to the first day of the hearing.

The Garfield County Commissioners voted today 3 to 0 to approve three special use permits to drill 53 natural gas wells on two pads and an associated pipeline in the community of Battlement Mesa.

“We are obviously disappointed in the final decision of the County Commissioners. It has been stated in the staff documents and in the Planning and Zoning Commission permit that the granting of this permit will cause a nuisance to the residents of Battlement Mesa. Many conditions of approval have been applied, but they do not eliminate the impact on the community. We still believe that the best decision for the community is to deny this permit and that it is impossible to mitigate a bad location,” said Dave Devanney, co-chair of Battlement Concerned Citizens.

“However, the 27 conditions of approval that have been attached to this permits are setting a higher bar for the next round of negotiations about residential drilling. Both here in Battlement Mesa and in other neighborhoods who are facing large scale oil and gas development across the state.  The residents of Battlement Mesa who have attended countless hours of meetings over the years have worked hard to gain these protections. We are grateful to the Commissioners for taking our suggested changes to the conditions of the approval seriously. But with the approval,  citizens will still be left policing the oil and gas industry in Battlement Mesa.  ” he concluded.

Commissioner Mike Sampson made sure to complement the work of Battlement Concerned Citizens, especially Devanney, in organizing concerned residents and helping them to voice their concerns.  Many of BCC’s recommendations about air quality monitoring, complaint systems, dust impacts and noise were adopted.

All the way up to the final vote, BCC leader and certified engineer Bob Arrington continued to assert that Ursa could access these minerals outside of the community boundaries.  “The best and most effective mitigation to drilling hazards is distance. I am still convinced if Ursa would spend the money to use their best equipment, they can reach the minerals from outside the Battlement boundaries,” he concluded after presenting the Commissioners with several examples of other operators who have managed to achieve higher drilling angles that Ursa says they can use to access the minerals.

“The deal isn’t quite done yet,” said Leslie Robinson, chair of Grand Valley Citizens Alliance. “Ursa has announced that they have submitted both of their applications for B and D pads to the state as of this week. So no break for us, Battlement Concerned Citizens and Grand Valley Citizens Alliance will get right to work examining the state permits and preparing our comments as soon as they are available.”

“We also have to finish our testimony before the Colorado Oil and Gas Conservation Commission about new rules governing drilling in residential areas. Ursa says they have already complied with any new rules we expect to see from the COGCC, and it may be that the conditions of approval on this permit are stronger than most state rules. If so, we hope the hard work of all these concerned citizens in Garfield County for over 6 years can help inform the state rulemaking process,” Robinson concluded.