Right now, the U.S. House of Representatives is working to undo a rule that stops the waste of our natural gas resources and limits pollution from oil and gas development on public and tribal lands. While our chances are slim to stop this reckless action in the House, tomorrow the debate will move to the Senate where we can block it. 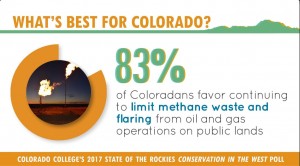 Take action today and ask Colorado’s Senators, Cory Gardner and Michael Bennet, to protect our taxpayer dollars and our health!

Recent studies show 83% of Coloradans support this rule and that it’s is widely supported by local officials, businesses, landowners, Latino organizations, taxpayer groups, and others across the U.S. Wiping out these newly implemented standards at the whim of industry disregards the thousands of Americans who support these efforts, costs American taxpayers, and pollutes our air.

The good news is we can stop this proposal by securing the support of the majority of the Senate. Every vote counts, and we need to send a clear message to Congress to cut waste and protect our public lands. Please call your senators and ask them to oppose the rollbacks of pollution standards that protect our natural resources, health, and wallets.

Can’t call? Send an email message here. (Entering your zipcode at the bottom of the following page will display draft email messages to your US Senators.)

What has Congress proposed?
House Natural Resources Chairman Rob Bishop (R-Utah) has introduced a resolution to nullify the BLM’s methane rule by invoking the Congressional Review Act (CRA). Rep. Scott Tipton, who represents our 3rd Congressional District in Colorado, is a co-sponsor.

The Congressional Review Act is a blunt instrument that seeks to undermine the federal rulemaking process. It allows members of Congress to review and revoke individual regulations issued within the last 60 legislative days; since most days aren’t legislative days, regulations issued as long ago as last summer are fair game. Each rule requires its own “resolution of disapproval,” an expedited process that in the Senate can pass with a simple majority, may circumvent the committee process and cannot be filibustered. If the resolution passes and is signed by the President, the rule in question becomes void and the promulgating agency is prevented from issuing a rule that is “substantially the same” in the future without an act of Congress.

What is this rule exactly?
The Bureau of Land Management’s “methane rule” is a common-sense initiative developed through years of public input and support to limit the waste of natural gas and reduce pollution from oil and gas development. When companies drill for oil, they also pump natural gas out of the ground. Because they want the more valuable oil, companies often just burn the gas (flaring) or let it leak into the atmosphere (venting). Both practices have terrible consequences for the climate and for air quality near oil wells – not to mention they waste a valuable resource that can heat our homes or help power our country.

A minute of your time is all it takes to make a call, but it can make a world of difference. Thank you!