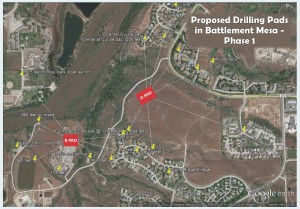 Although most residents didn’t know it until recently, Battlement Mesa, a retirement community along I-70 in western Garfield County, has been slated for oil and gas development ever since the establishment of the planned unit development in the 1980s. The current owner of the mineral rights under the community, Ursa Resources, announced early in 2015 that it plans to drill 53 wells on two industrial-scale pads, with the potential for three more pads in later phases. One pad is proposed to be less than 200 yards from some houses.

Residents of Battlement Mesa took their issues with Ursa’s proposal to a corner in Glenwood Springs prior to a Planning & Zoning Commission meeting.

WCC and its Garfield County chapter, Grand Valley Citizens Alliance, are actively supporting Battlement Concerned Citizens, which formed in 2009 to oppose the plan. We are utilizing county and state reviews of the proposal to push for relocation of the wells to a safe distance from the community, and for mitigation of any impacts.

Contact WCC Organizer Emily Hornback at (970) 256-7650 or emily(at)wccongress.org for more information or to learn how you can get involved.

“We applaud the COGCC for recognizing the right of impacted people to speak and provide testimony on a project that will drastically impact our lives for many years to come,” Dave Devanney, chair of the Battlement Concerned Citizens. (Read more)

Living with Oil and Gas

“I’ve got asthma now. Terrible respiratory problems. If I get a cold, seems like it develops to near pneumonia, and I’m not alone," says WCC member Leslie Robinson of Rifle. "I checked with my neighbors up and down the street..." (Read more on Facebook)