WCC members and allies are celebrating a victory – or at least a reprieve – after the Bureau of Land Management announced in April that it will redo its environmental review of a proposal to drill 108 oil wells in the Whitewater area, within Grand Junction’s municipal water supply.

WCC and the Paonia-based Citizens for a Healthy Community had challenged the proposal by Fram Exploration, with help from the Western Environmental Law Center.

“As an impacted landowner in Whitewater, I am mighty glad the BLM is taking a harder look at this proposal,” says WCC member Don Lumbardy. “My ranch depends on the water from the springs in this area, and I have a well that I rely on for drinking water, so I was troubled about possible impacts to my livelihood and property.”

Fram’s Whitewater Master Development Plan proposes 108 wells on 52,000 acres east of Whitewater, near the base of the Grand Mesa. The BLM’s Grand Junction office approved the plan in June 2014, over the objections of Don and other residents. In response, we and our allies filed a request for BLM State Director Ruth Welch to review the project as an alternative to legislation.

A few months later, Fram moved a drill rig onto the site in an attempt to maintain its lease through active production. Instead, the BLM suspended the unit, halting activity pending further analysis.

Thanks to the BLM’s decision, that analysis will now be held to a higher standard and will be subject to another round of public comment. The BLM remanded the plan to its Grand Junction Field Office for further environmental review based on the fact that the plan did not analyze for hydraulic fracturing.

So now we wait for the new draft decision, which based on the BLM’s track record, won’t be out anytime soon! In the meantime, drilling will not be allowed in the area, giving residents a much deserved reprieve from this pending project.

Contact WCC Organizer Emily Hornback at 970-256-7650 or emily(at)wccongress.org to learn more or get involved! 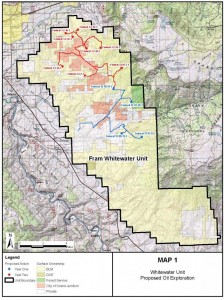 Living with Oil and Gas

“I’ve got asthma now. Terrible respiratory problems. If I get a cold, seems like it develops to near pneumonia, and I’m not alone," says WCC member Leslie Robinson of Rifle. "I checked with my neighbors up and down the street..." (Read more on Facebook)