Today, Battlement Concerned Citizens decried the final decision from the Colorado Oil and Gas Conservation Commission (COGCC) on the second of two natural gas pads now approved for construction within the boundaries of Battlement Mesa. The COGCC approved the Ursa Resources permit over the strong concerns of its sister agency – the Colorado Department of Public Health and Environment.   The State Health Department opposed the placement of the waste water injection well in a residential area and adjacent to the community’s water intake on the Colorado River. 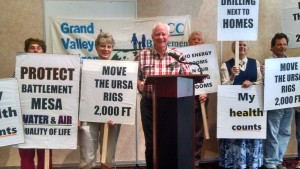 The 25 wells approved on the “B pad” comes a month after the COGCC approved the 28-well “D pad” application.  Both well pads are in the same area or Battlement Mesa – within 1,000 feet of residential subdivisions and an apartment complex. The drilling and hydraulic fracturing is expected to take as long as three years to complete.

“This decision makes one thing very clear - the COGCC will never say no to operators, even if the location is obviously putting people at risk,” said Doug Saxton, co-chair of the Battlement Concerned Citizens. “Even the state health department had strong concerns about putting this operation so close to our water intake, but apparently that was not enough to move the pad or completely eliminate the waste water facility.”

“It seems like the COGCC interprets the rules that say pads need be ‘as far as possible’ from homes to mean ‘as close as you want,’” Saxton concluded.

“This decision sends a clear message that Ursa will be allowed to drill anywhere they want, including right next to the local high school,” said Dave Devanney, fellow BCC co-chair, referencing Ursa’s newest proposal to drill 22 wells within 700’ of the Grand Valley High School in Parachute. “Given this precedent, Ursa now has a green light to run roughshod over our community and even break COGCC rules since it is clear they won’t be enforced.”

The approved applications include numerous conditions of approval to help mitigate the inevitable impacts of both projects.

“The conditions of approval are just window dressing,” said Betsy Leonard, resident of Willow Creek Village. “We appreciate that the COGCC is asking a lot from Ursa, but these projects will directly impact our lives for years. These “COA’s” should be considered among the minimum required precautions by an operator even thinking about putting in wells next to people’s homes. But now and forever, the best ‘mitigation’ is distance.”

“The enforcement of the conditions of approval will largely fall on the residents of Battlement Mesa, who will be the ‘local inspectors’ and ‘police force’ for this project for the next three years.”, said Dave Devanney. “And these two pads, and associated 2.5 mile pipeline are just the first of a multi-phase plan that will make Battlement Mesa an industrial zone for generations to come.”

Residents and local governmental bodies are still reviewing the approved applications and considering their next move.  Due to COGCC rules that clearly favor operators, residents do not have standing to appeal the decision.

These decisions come just as two initiatives regarding oil and gas development narrowly missed having enough signatures to be considered for the November ballot.

Despite the bad news, Leslie Robinson, chair of the Grand Valley Citizen’s Alliance, issued a statement requesting the governor to intervene in this issue and promising to keep up the fight.

“We call on Governor Hickenlooper to sit down with citizens that are being incredibly impacted by this industry.  We ask the Governor to stand with his Department of Health and Environment  that has stated that oil and gas waste injection wells do not belong in neighborhoods or immediately upstream of a community’s water intake.”

“Despite this bad decision, Grand Valley Citizens Alliance and Battlement Concerned Citizens will continue to work for better siting locations. We will keep up our efforts to protect Battlement Mesa’s drinking water supply by preventing a toxic waste water injection well from being built on Pad B next to the water intake. We will work with residents and concerned parents of Parachute to challenge the siting of a giant oil and gas industrial site next to the Grand Valley High School. But most of all, we will continue our work for local and state regulations that truly protect the health and wellbeing of people living with oil and gas development.   We will not give up until the public health, safety, and welfare are protected.”